The Gift of Life

Chet is headed up to Des Moines, Iowa today for the premiere of the documentary, The Gift of Life.  The documentary, hosted by Mike Huckabee. explores the sanctity of life as a moral issue and looks at the lives of individuals who were nearly the victims of an abortion, but through God’s grace were spared. 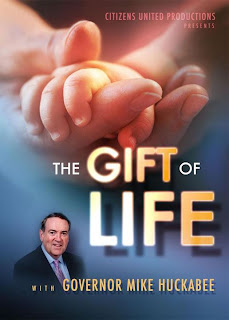 The Gift of Life
Chet's parents did not know that he would be born without arms and would have never considered abortion even if they had known.  His story is about the doctor who delivered him, and, after heroically saving Chet's and his mom's lives, decided on his own that if Chet's body was as 'mangled' on the inside as it looked on the outside, then it would be better if he didn't live.  The doctor did the minimum suction and lay Chet off to the side by himself.  Today, Chet speaks out not only against abortion but especially against selective abortion.  Some parents decide to abort their children because they may not be "perfect."  Not perfect can be anything to physical disabilities to Down Syndrome to even not being the sex that they were hoping for.  Chet's message is that we can't know what the future holds for anyone.  Nearly 32 years ago, who would have known that we would be married with a beautiful daughter and another on the way.  You can see from the other entries on this blog that he has a full and happy life regardless of how he looks on the outside.

Late last summer, the film crew came to our house and interviewed Chet and shot some footage of our family together in our home and at a local park.  We previewed the finished documentary a few days ago.  It is an amazing film.  Pro-life is often a negative term in today's culture, conjuring images of picketing, anti-abortion ads, and even killings of the doctors performing the abortions.  We love how this film challenges you to look beyond the deaths and see people and lives.  Every life is valuable no matter how not perfect we may think it is.  Contempt for any life, whether that be for the unborn baby, the mother deciding to get an abortion, or the doctor performing it, is not how we, as Christians are to believe.  Maybe if we stop hating and judging, and love as we are taught to do, then more precious babies will be saved and more people will come to know Christ.

I am so proud of Chet and the message that he shares with thousands of people each year.  I would love to be there with him but we couldn't make it work with my pregnant belly!


Here is the trailer for the documentary:

We just found out that you can watch the event tonight (Wednesday, December 14) at 7:00 Central on C-Span 2.  Link: http://www.c-span.org/Events/Abortion-Campaign-Finance-Topics-at-Candidate-Forum/10737426276/
Posted by Joni McDoniel at 9:01 AM